NICOLE WILLIS & THE SOUL INVESTIGATORS: Tell Me When/ It’s All Because Of You (2012) 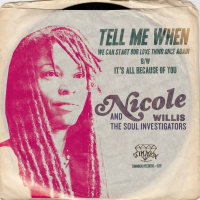 Nicole Willis and her band’s latest investigation into soul appears to conclude that the seventies is the new sixties. Thus it is that Tell Me When (We Can Start Our Love Thing Again) finds her hopeful pestering of a previous lover for further bedroom action delivered in a markedly smoother style than anything off 2005’s If This Ain’t Love LP. Slower, more depressing B-side It’s All Because Of You makes it clear that her ex isn’t interested prompting her to give us a running commentary of her descent into alcohol and analgesic dependency, “Why do I feel this way?/ I have a dreadful pain/ Is it a migraine or is it the flu/ Reach for the as-pi-rin/ Then popped a sudafed drink/ But my heart started racing/ Didn’t know what to do.” Turning to her GP for advice, she is told quite plainly, “there’s nothing wrong with you” though it seems patient/ doctor protocol prevented him from adding, “maybe you should do some more of the sixties stuff.”
(Out 29 October on Timmion)