NICOLE WILLIS & THE SOUL INVESTIGATORS: Happiness In Every Style (2015) 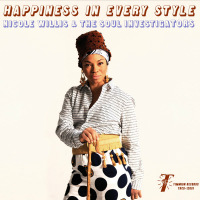 It’s hardly shaping up to be a sparse autumn for retro funk soul releases but a sure stand-out was always going to be the latest full-length effort from Nicole Willis & The Soul Investigators, Happiness In Every Style as the Finnish arm of the global retro funk-soul scene prepares to drop the band’s ‘difficult’ third full-length effort. However, as it often seems to transpire in this scene, album three sees neither a loss of direction or quality. Of course it always helps that the parameters of the ‘direction’ that the band are working within are more or less finite given the retro nature of the genre, though having world class production, band and singer are a bit of a bonus too.

Essentially, this LP is (as the title signifies) thematically lighter than it’s predecessor Tortured Soul though musically more similar to this than debut Keep Reachin’ Up. Let’s put it this way – you won’t find many jaunty Motown-ish outings like My Four Leaf Clover or Invisible Man on it though there are some surprises. Two of these are the soul-jazzful, flute-featuring instrumentals Bad Vibrations and Vulture’s Prayer, then there’s the crossover appeal of torch song Angeland other slowies Open Sky and the minor key Thief In The Night. Also of particular note are the positive uptempo vibes of lead single One In a Million moody dancefloor heater Paint Me In a Corner and the sultry late-night groove of closer Hot Sauce. In short, more slowies than before, more upbeat than the last outing but quality assured and happiness with every visit to the stereo system.
(Out 2 October on Timmion)

No other embeddable audio but listen to all tracks HERE

Posted on 23rd September 2015 no comments