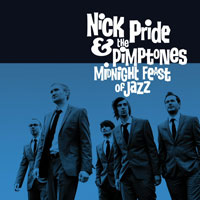 Midnight feast of jazz? I’d rather have a 3.a.m. dirty funk kebab but go on then… My first experience of Newcastle jazzbos Nick Pride & The Pimptones was the Smoove retouch of their Deeper Pimp thing on Wack Records featuring an Aretha acapella. You might have thought that with a band name like the Pimptones that their releases would be rich in wah-wah licks and hot-buttered basslines but over half the musicians in the band tote some kind of metal wind instrument. So Midnight Feast Of Jazz is literally awash with horns. Now don’t get me wrong, a horn section is a nifty addition to any funk band and some calculatedly judicious stabs and parps can (and often are) the icing on the cake but this is so brassy it makes Elsie Tanner look like a nun. Also – on this outing at least, the band follow such a jazzy path across the land of funk I kept having to check I hadn’t slipped back in time to the Acid Jazz HQ in the early nineties. Best cut is the hard-hitting, Jess Roberts-featuring Waitin So Long which brings a little soulful groove to the table – otherwise – be afraid. And for fuck’s sake nobody mention Courtney Pine. Preview album on player below, vid below that and press guff below that…
(Out now on Record Kicks)

(PRESS RELEASE) After breaking through with 45 “Waitin’ So Long” / “Lay It On The Line” released earlier in the year and lauded by the likes of Adrian Gibson (Freestyle Records), Dr. Bob Jones (Future Soul) and Dean Rudland (Acid Jazz / Kent / BGP), Newcastle hip cats NICK PRIDE AND THE PIMPTONES land at Record Kicks with an impressive debut album. Jazz guitarist Nick Pride formed The Pimptones in 2007, and after the release of a self-financed album and a highly acclaimed 7” single on Wack Records, the band was picked up by Record Kicks. “Midnight Feast of Jazz” is therefore the first official full-length for this group, and includes 10 tracks of phat grooves, smooth arrangements and dance-floor friendly soul jazz.

With this album Nick Pride & The Pimptones prove their growing maturity and attention to stylistic detail, providing an engaging listen from start to finish. In uptempo funk monster “Come And Get It” The Pimptones immediately provide a clear demonstration of why they can be considered one of the finest horn sections in the UK, while “Gold Leader”, “Midnight Feast Of Jazz” and “Mia Sorella” take us deeper into dance-floor jazz territory, highlighting the group’s transition towards sleeker atmospheres. Stand-out vocal tracks “Brighter Day feat. Susan Hamilton” and “Lay It On The Line feat. Zoe Gilby” both supply a dose of quality soul to the mix, making “Midnight Feast of Jazz” an essential album for the savvy soul-jazz dancer!

“Wow these guys have come leaps and bounds over the past year! This is quality all the way and will be hammered to an inch of its life on the show!” – Craig Charles (Funk&Soul Show on BBC6)

“In a sea of funky soundalikes this stands out. Mighty Mighty!” – Dean Rudland (Acid Jazz/ BGP)

“This lot can groove! Take a trip from Funky floor shakers to out and out Jazz-dance business with a touch of Latin and Soul in between, everything you need to start busting moves!” – Phil Levene (Eclectic Jazz)