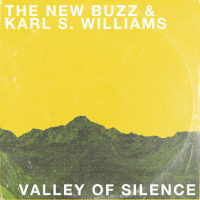 Bringing the soul fuzz on this 45 are The New Buzz & Karl S Williams – the latter joining the Brisbane outfit to lend a southern rasp to torch song Valley Of Silence on the A-side of their new seven inch. Initially, it’s all about the low ‘n slow as Williams smoulders along to brooding organ and tremolo guitar but eventually things build to an epic psych-fuzz outro and Williams in soul overdrive. There’re two sides to a 45 of course though and if you flip this one over you’ll be hit with the instro Brisket Bits – a livelier but no less brooding slab of a psychedelia. The 45 is limited to 30 copies (complete with Williams’ daubings!) so don’t sleep when it comes out in August.
(Out now (digital)/ 15 August (approx.)(vinyl) on Valley Heat Records)