NÉSTOR ÁLVAREZ: Fuego/ THE SUPERSONICS: The Chosen One (Vinyl 7″) 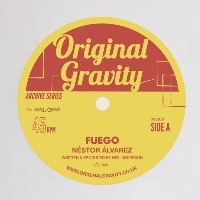 As the promo for this one points out, while Original Gravity Records only came into being in 2017, the recording history of label boss Neil Anderson stretches back a lot further than that. Which is why this Néstor Álvarez/ The Supersonics 45 is part of the ‘Original Gravity Archive Series’ since it features one recording from 1998 (!) and another from 2010. On the A-side, Mr Anderson dons Latin alter-ego Álvarez and ventures into the realm of funked up 60s Latin grooves where scorching organ and frantic flute vie for supremacy over blistering drums and percussion. Flip it over though and The Chosen One is all about the rare groove funk of Anderson’s The Supersonics nom-de-guerre. If that’s not two good reasons to cop this right now, I don’t know what is.
(Out now on Original Gravity Records)