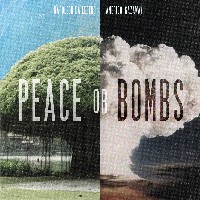 ‘Peace or bombs’ is the choice discussed by Napoloeon Da Legend & Amerigo Gazaway on the new single lifted from LP The World Changed and any profits gained from the sales of either single or album today (i.e. 4 March) will be donated to the Ukrainian Red Cross Society. It’s a simple choice isn’t it? Peace or bombs? More pertinent today than in decades. On the one hand, most people wanting peace; on the other the, ‘Kill the pig, cut its throat, bash him in,’ mad dog psychopaths wanting bombs and, just as culpable, their enablers, the ones whose greed, even now, is more important than peace. But when our Napoleon, over Gazaway’s sombre beat (not to mention one that passes for one with suitably eastern European influences) speaks of, ‘Post-truth era terror,’ and how that, ‘Got you off path right off the bat, decisions getting poor for that,’ you might just also want to consider asking – ‘Who enabled the enablers?’
(Out now HERE)