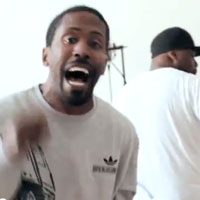 New dope from underground rapper Murs in the form of S-K-I-B-E-A-T-Z – the stand-out from his current LP Love & Rockets Volume 1: The Transformation and his tribute to the man responsible for the music on said LP. That’ll be Ski Beatz then who I, personally, remember as the man responsible for the funk-fuelled beats on Camp Lo’s excellent Black Hollywood LP. S-K-I-B-E-A-T-Z finds Ski dropping beats with a heavy funk flow while Murs lays into them as snorts snow, “The mainstream is full of lames with bad tatts/ Heads filled up with cocaine and wack raps.”

Posted on 9th November 2011 no comments