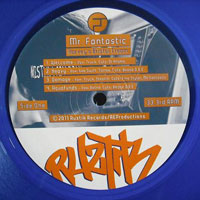 Ahhh Bristol! Famous for riots, slavery and talking like a pirate. Not to mention scrumpy, the mere vapour of which can remove paint and for sherry that according to local legend tastes smoother than the local milk – hence the name ‘cream.’ Oh yeah, and quite well known for beats too, usually heard emanating from clouds of herbal smoke. Enter Bristol-based producer Mr Fantastic, a.k.a Justin Harvey, with the cream (that LP name making sense now?) of the boom-bap beats at which he’s been slaving away. There’s also rousing, rhythmic verse supplied courtesy of the cream of local MCs – at least one of whom – yes – raps like a pirate (stand up Turroe!) – and cuts from the cream (besides himself of course) of local scratch DJ talent.

Best tracks? Unusually they’ll be towards the middle and end of the LP. The heavy breakin’, scratchfest juggernaut of Aquafunds features Retna on the mic and cuts from the one-and-only Sir Beans OBE (where’s that damn album son?) while hard-hitting uptempo bump Superhero finds MC Gee Swift on lyrical duties with Dr Krome and Fantastic himself on the cut. Best of all – there’s the understated funk of Getwidit demonstrating Fantastic’s cut-skills once more and effortless flows from Truck. Other MC appearances come from Stealth, Awkward and Numskullz’ frontman Rola (amazingly, since rumour had it that he’d foresworn the mic) and further cuts from DJ Finestyler meaning this is a veritable who’s who of Bristol hip-hop. Like the PR says, “huge chunks of funk for your head nodding pleasure.” Make the most of it before the blue haze thickens and you don’t hear from any of this lot again for, oohhh…you know…some …time…Now – ‘ave anyone seen that scrumpy bong?
(Out May 2011 on Ruztik Records)

After years of brewing, Mr Fantastic’s Bristol-based producer album is finally ready, adding to a catalogue of solid underground hip hop releases on the Numskullz-owned Ruztik Records and AE Productions. The result is an album of 8 booming tracks with no annoying filler tracks or interludes, featuring some of Bristol’s finest MC’s and also a couple of Bristol’s best scratch DJ’s (since Mr Fantastic decided to get some other turntable styles featured besides his own) to combine as much Bristol flavour on one release as possible. This release is pure Bristolian hip hop – beats, rhymes and scratching – from start to finish onstructed from Mr Fantastic’s vast record collection and enlisting the help of some good friends that just happen to be some of Bristol’s best MC’s and DJ’s. No singing for mass appeal here, just huge chunks of funk for your head nodding pleasure.