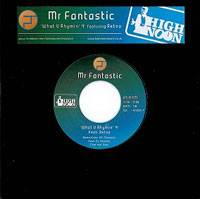 Bristol producer Mr Fantastic’s got a new beat – is there any chance his homie Retna would be available to rhyme on it? You’d have thought so with a jump-up b-boy break and understated wah-wah chops like this but Retna’s more full of excuses than a lazy teenager – he’s turned a bit cynical, started listening to tech-house and minimal and, quite frankly, he ‘don’t wanna do this no more.’ ‘What U Rhymin’ 4?’ is indeed the question then and one that Retna asks himself several times during the track – since he did of course end up rapping on it which is how we know he didn’t originally want to because that’s what he raps about alright? Confused? Feel free to take it up with Retna who, on the evidence of this, will eloquently moan at you for pestering him but ultimately give you pretty much what you came for. ‘Ave it!
(Out early July 2012 on High Noon)