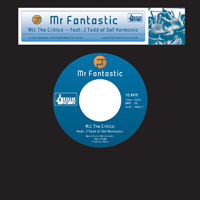 “All the critics love me ok, all the critics love me, all the critics love me ok…in the United Kingdom,” – runs J Todd’s cheeky/ ironic chorus on All The Critics on Mr Fantastic‘s debut wax release. If cheeky, that’s technically the sort of arrogance that wants taking down a peg or two isn’t it? The thing is…Fantastic’s beat is laid over a classic Meters sample, he’s roped in a quality Yank MC on the mic, and the bass is massive. If ironic, this release should ensure a little more positive critical attention. Big, fat, true school hip-hop with a big shouty hook. Yeah, all right, I do fucking love him, cocky bastard. Ladies and gentleman – Mr Fantastic. Don’t sleep!
(Out March 2011 on High Noon)

All The Critics (feat. J.Todd) by Beats By Mr Fantastic
(PRESS RELEASE) Bristol based DJ/Producer Mr Fantastic has been making his mark since 1997 as quarter of Bristol Hip Hop crew Beat Route 38 (AEProductions), and also since 2004 handling Turntable duties for Bristol’s finest soul/funk/hip hop project Hundred Strong, while being a regular feature of Bristol’s DJ circuit – infamous for his Soul/Funk 45’s and classic Hip Hop sets. For the first vinyl release under his own name and first outing on High Noon Records Mr Fantastic is ably assisted by J.Todd of Def Harmonic on vocals hinting at the trials of the British music industry – somewhat of a unique subject matter for an American but, J.Todd has spent a lot of his musical career here in the UK on Altered Vibes Records and touring with Hundred Strong, which is where Mr Fantastic came to know J.Todd. On ‘All The Critics’ Mr Fantastic stays close to the funk with a beat sculpted from chunks of an organ heavy groove that bounces along creating a perfect platform for J.Todd’s slick vocals and Mr Fantastic’s turntable skills.