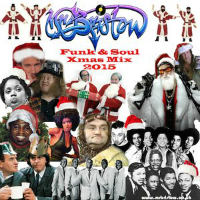 The massive number of releases the monkey gets sent means it’s not usually possible to post the sizeable number of deejay mixes that get sent in too. Occasionally though, an exception is made, especially if the mix is funky and has soul. And humorous snatches of film and TV dialogue. And scratching. And (in an ironic reversal of a frequent dj experience) it’s the birthday of the dj who made it – at least it was yesterday. Especially when he’s capable of rocking the decks all day long, hoppin’ and a boppin’ and a singing his song. And, yes, because all the punters on Deejay Street love to hear Bristow go tweet, tweet, tweet – which is uncannily like the scratching sound that opens this fifty plus minute of seasonal, funk, soul and the occasional bit of rock n roll. Happy late birthday Mr Bristow! Cop it below off Mixcloud or Hearthis, the rest of you!

Posted on 9th December 2015 no comments