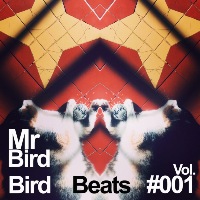 If you felt that the world hadn’t heard from Mr Bird for some time, you’d be right. But if you were to assume that he hadn’t been busy for the last twenty months or so since the pandemic first kicked off, you’d be wrong. For Bird has most definitely been busy – indeed – about ten EPs’ worth of instrumental material busy apparently, the first two of which, Bird Beats Vols. #1 and #2 are already out. Of the series, Mr B says that we can expect a rather varied sonic palette including hip hop, funk, disco and some stuff with more of a tropical vibe too. As it happens, it is world music sounds that weave in and out of the breaks n scratching of Begin Again, the opener to Vol.#1 whereas next track Dopey Stoat provides a straight up funky hip-hop-strumental succeeded by dancehall vocal samples on Go Boom and a Balearic feel on Don’t Let It Go. Vol. #2 on the other hand kicks off with a very late-90s Ninja-tuneish slice of funky trip-hop on 50 Shades Of Funk, and follows up with the the samurai-movie OST feel of Hide Away, the lazy soul vibes of Sunsoul Jam and a 2021 rework of another soulful cut, Hopin’ It’s You. If that’s not a varied selection of breakbeat-based sounds, I don’t know what is. And plenty more to come too.
(Out now HERE)