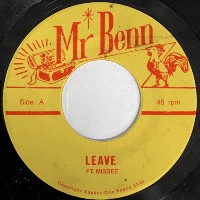 Here’s a late summer reggae heater from Mr Benn then in the form of Leave featuring Misdee. The release comes out on Mr B’s own Square One Sound imprint but sports artwork pastiching the classic Treasure Isle label logo – even down to the weathered look of something that’s been around since the late sixties. It’s a blend of old and new which reflects the track itself as Mr Benn delivers a twenty-first century update on the late sixties rocksteady sound with Misdee capably providing a sweet vocal on top. Also comes with an instrumental ‘version’ and already much dug by both Rodigan and Daddy G!
(Out 9 September on Square One Sound)