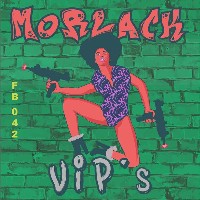 The time was when nary a month or so went by without a new Morlack release but things have been strangely quiet in our DC Go-go-obsessed friend’s camp for – oohh – over a year. Until now that is, for here is our man with the forty-second (!) release on his Funk Blasters label – the four-track VIPs EP. Strictly speaking it’s not actually new material – mostly anyway. There is one new track but more about that in a minute, first let’s deal with why he’s putting out old stuff like Boogaloo, Tight & Loose and Need A Help. Well, strictly speaking it’s not actually old stuff – at least it’s not the old stuff as it was originally put out. Why? Because it’s the ’22 versions of these three of course! Ten years down the line from two of the original releases and five from t’other, you might expect our man to have learned a few more production tricks, which he has. And you know how it is, you’re trawling through your back catalogue, as you do, having a listen and your brain’s all, ‘Oohh, can’t believe I did that!,’ ‘Heavens, no, shouldn’t have let it go out like that,’ ‘If only I’d known x then, I’d have done y,’ and so on and so forth. But then the thought must have occurred – ‘Er, I suppose I could actually re-visit these bad boys and put out new and improved versions! I could even slip in a new one as well while I’m at it.’ That’ll be a monstrous cannibalization of Roy Ayers’ Poopoo Lala then.
(Out 11 November on Funk Blasters)


Posted on 9th November 2022 no comments