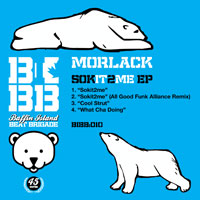 Definitely one of the funkiest producers aligned with the ghetto funk movement, the Sokit2Me EP is Morlack’s latest effort and finds him reworking a number of old school gems for the kids. The title cut sees him have a go at a bit of DC Go Go – and when I say ‘having a go’ I mean producing a bass-bumpin version of Ayre Rayde’s 1986 cut Sock It To Me – a rework which All Good Funk Alliance themselves then rework with extra bass and synths. The second half of the EP consists of two further re-versions. First up is Cool Strut whereon Morlack puts the ghetto into Bernie Hayes’ funk and it’s all rounded off with thumping breaks rerub of Seawind’s 1980 disco cut What Cha Doing. ‘Ave it.
(Out now on Baffin Island Beat Brigade)