MORLACK: My Spin Is Ur Drama 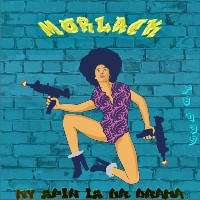 Morlack reckons his spin is your drama on his new Funk Blasters drop entitled – er – My Spin Is Ur Drama – and he’s not talking about his washing machine or his ability to manipulate political cock-ups into media triumphs either. Nope, it’s another anything goes (as long as it’s broadly 80s-funk-influenced party breakbeat) Morlack EP with the samples blender in full effect. Thus while the beats on this one are broadly 80s funk-derived (obviously) beat-wise, everything goes vocally into the mix from Atlanta crew Jim Crow (the title track), Miami Bass outfit 69 Boyz (Spirit Of The Skurred) and the Hollow Earth fixated Westbam (Agharta Beet) to San Francisco rap-rockers Faith No More (Epic Enough) along with the one the monkey didn’t know that’s got a bit of hip-hop and dancehall going on.  Should cause plenty of drama when played out!
(Out now on Funk Blasters)

Morlack · My Spin Is Ur Drama Ep_teaser