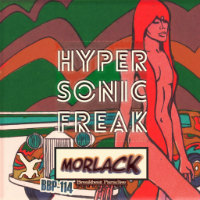 Ok we’ve all been there, over done it on the mince pies and the turkey. And the alcohol. And the dvd boxsets. And the family. Er – so anyway – now it’s time to get back into it in the run-up to the year’s most massive celebration. And running towards this like a hypersonic freak is Morlack – almost as if he’s only recently looked at his calendar and realised, ‘Shit!’ I haven’t had at least twenty releases this year and now there are mere days left to redress my tardiness.’ Crap! What are you going to do about that Morlack? I guess there’s only one thing you can do – release a whole new LP entitled Hypersonic Freak filled to the brim with your trademark mix of 80s funk and hip-hop ‘pellas all flipped via some of those newfangled production techniques? Yep that should do it.

This new one is full of farty bass, mirrorball synthesisers and horn fanfares all rubbing shoulders with vocals from anyone from the Ultramagnetic MCs to Das Efx. Frankly it’s like being in the room with Trouble Funk, Digital Underground and A Skillz while the aforementioned emcees argue over the mic with Indeep. Mainly because that’s precisely the soundscape that Morlack (with his ear ever attuned to party noise) has orchestrated. Highlights include the hands-in-the-air opener and title track, the stomping Moments Of Bang and the dancehall-disco flexing Let’s Get It. Release the fireworks!
(Out now on Breakbeat Paradise Recordings)

Posted on 29th December 2015 no comments