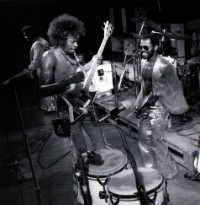 It’s Bootsy Collins’ birthday today and what better way to celebrate than with His Mind Set Him Free, Morlack‘s muscular re-version of The House Guests’ My Mind Set Me Free. The House Guests was the band Bootsy formed in between leaving James Brown over a pay dispute and joining Funkadelic just over a year later. Given the short space of time between epic funk acts it’s a surprise he was able to set up a band and squeeze out one single, let alone two – though that’s what he did – the better known What So Never Dance and the original version of this. Kind of a ‘mission impossible’ you might say – all highly apposite given where Mr Collins clearly ‘acquired’ the idea for the tracks opening bars. You, on the other hand are bound by no such constraints and can download and enjoy Morlack’s version at your leisure. Don’t forget to thank him on his soundcloud or Facebook page. And don’t forget to wear your spangly top hat and star-shaped sunglasses today.