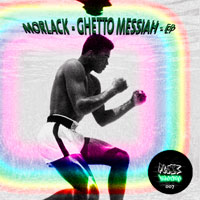 “He’s not the messiah he’s a very naughty producer.” “I’m Morlack!” “No I’m Morlack.” “But mother, I thought you said the ghetto funkers raped you?” “Yeah. At first.” “I have a very gweat fwiend, his name is Biggus Bassus,” etc. etc. It’s Morlack everyone and in case you missed it, he’s got a new EP out – Ghetto Messiah. Morlack does ghetto funk that sounds like it was made between 1975 and 1995 – in other words he’s easy on the wobbly bass but drunk on the funk. Hurrah! And he’s made an effort to use more than ‘standard ghetto funk’ break numbers 1-3 and track down acapellas that haven’t already been rinsed a million times – in this case DMX, Big Daddy Kane, and KRS-1, among others. The Ali-referencing title track flips a dnb break with a pronounced half speed 90 bpm kick and snare so you can rock it in a hip-hop set too while elsewhere it’s beats in the low hundreds. Float like a butterfly sting like a bee!
(Out now on Funk Blasters)

Posted on 9th September 2012 no comments