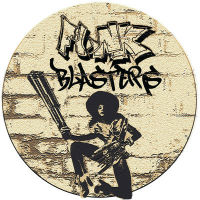 Yet another to add to the exponentially growing number of ghetto funk albums is Morlack’s For The Brothers In The Ghetto which is no less than his second full length effort. On it, for the most part, our man continues to put eighty per cent of anyone producing within the genre to shame in terms of original sample selection and general all-round funkiness. As usual, you can expect an extended raid on the devil’s decade of the nineteen eighties as Morlack tracks down those go-go, funk and hip-hop samples that everyone else forgot or never even knew about and reinvigorates them with a crunchy, funky twenty-first century breaks twist.

While common Morlack sound motifs include the pitch-shifting synths of the early eighties or the bouncing booty bass of Bootsy’s bass, he’s not above dropping on a hook-laden vocal from time to time and it is with one of these that the album opens from Nicki Minge-er- Minaj, no less. Elsewhere expect to hear ODB, Guru and – er – Black Box. Black Box? I’m afraid so. And there’s scarier shit than that to be found in four of the last five tracks where it all goes very late eighties/early nineties (Walkin Game) and even a bit housey – Boogie Ships and Thrill. It’s a bit like when you’ve been blithely wandering through the more bohemian part of a foreign city lost in a daydream and suddenly realise you’re well into the red light district being eyed up by a pair of crack whores, a shark-eyed pimp and a twitchy-looking mugger type. Take the my advice, stay in party-ville a.k.a the first eleven tracks and in particular head for party banger Bizz or the title track. Anything from twelve onwards and I can’t guarantee your aural safety!
Out now on Funk Blasters

Posted on 10th February 2013 no comments