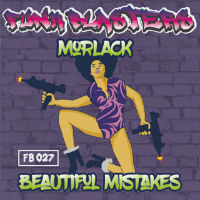 Reports of Morlack’s death have been greatly exaggerated, it seems, since here he is in fine fettle with new LP, Beautiful Mistakes. But where has the former ‘busiest man in breaks’ been and what’s with that title anyway? Well, apparently he’s spent some time hanging out with Trotter in Brazil attending festivals in the middle of the jungle which – admittedly – is a pretty good reason for being an idle bastard. As for ‘beautiful mistakes’ well – anything that includes samples of Boney M, Lord Finesse, Mike Patton and Ghost Town DJs speaks of a man whose musical plundering knows no bounds so it’s little wonder he ends up producing stuff he didn’t intend that nevertheless ends up having something about it. Does this mean that Beautiful Mistakes crazily veers from genre to genre though?

Actually, no, and that’s despite the fact that the opener features funk metal bass, a double time signature and mashes up Bassnectar & Kraddy’s Snakecharmer with something a little more dancehall while the closer is a drum n bass cut-up of James Brown’s Please Please Please. Other than that we spend quite a lot of time in Morlack’s usual alternative dance wonderland where 80s electro boogie, 90s dance and twenty-first century breaks collide. Highlights include Represent‘s monster bass n breaks rerub of Instant Funk’s ’83 hit Who Took Away The Funk and Fire In The Rain which revisits something Morlack played around with on his track Bizz a few years ago but now comes with Busta Rhymes and added brown girl in the ring.
(Out 30 June on Funk Blasters)

One Response to MORLACK: Beautiful Mistakes (2017)