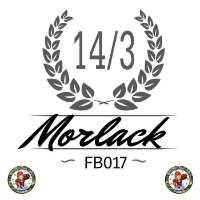 Morlack continues his all-out attempt to release more on his own than the entire rest of the party breaks community put together this year with 14/3 a.k.a. his 3rd album (album not release) in 2014. Having left assorted rivals and remixers gasping for breath like sixty-a-day smokers our man sprints indefatiguably for the end of the year finish line with a twenty-seven track (!) package of remixes. Obviously, with that kind of a lead there was only going to be one person around to do any remixing. That’s right – Morlack. He’s remixed himself. Perhaps that’s why there’s a winner’s wreath on the artwork – in fact he got so carried away with some of the remixes that they became new tracks.

Expect new versions of myriad cuts from recent previous releases delivering an eclectic blenderising of everyone from Fishbone to Infectious Grooves, Black Box to Outkast and the Ting Tings and Madonna and an eclectic palette of sound taking in disco, funk and synth-heavy bass vibes. Keep your ears peeled for a new and heavier version of Funky Woman, the crazy-ass nastiness of Wizard Of Nigga, an almost unrecognisable Rufus Thomas buried beneath layers of extra percussion, fx and chopped up vocal snippets on Ghetto Train.
(Out now on Funk Blasters)

Posted on 9th October 2014 no comments