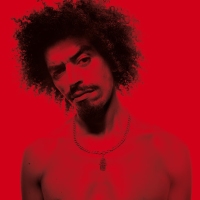 If you ever wondered what the lovechild of The JB’s and Yello would sound like, the monkey’s got the answer – it’s Momo Said in The Basement. No, not a bon môt from creepy Japanese doll but rather the new single from eccentric Italo-Moroccan artist Momo Said. It’s a commentary on the cyclical nature of history according to the PR and takes the form of an uptempo jazz-funky beat with Said speed-mumbling over the top in the manner highly reminiscent of Swiss legend Dieter Meier. For extra weird points on the video, it looks like the director has animated Said’s mouth doing the vocals and then superimposed this on our man’s face rather than, say, film him verbalising. Perhaps it’s a metaphor for the disconnect between people’s words and actions – a feature that characterises much of politics for the last century and perhaps explains why the only thing many people seem to learn from history is that nobody learns from history. The track is taken from Said’s funky and stylistically varied LP Break The Rules – the same one from which 2019’s Carig Charles-feted disco extravaganza Sunny Side Of The Street was also lifted.
(Out now on Tam Tam Recordings)