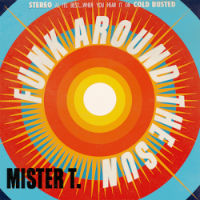 Mister T (no, not that one) has been down the breaks-gym pumping hard and come up with twelve tracker Funk Around The Sun for his sins. It’s party breaks in the traditional sense then as he veers from funky beats to swing beats to disco-influenced beats on the journey from one end of this twelve tracker to the other. It’s not dissimilar territory in fact, to that of his curiously-named label mate My Neighbour Is, though arguably a bit more uptempo at times.

There’s a full twelve tracks to the LP apparently, though since the promo only allows access to half this number you’ll appreciate that even the monkey only gets to funk halfway around the sun at the time of writing. Not that it’s an unsatisfying journey by any means what with the dirty sax-funk n hammond breaks of Dig This, instrumental swing-hop number The Usual, the sparse downtempo future funk of Hope Saxes Come Soon, seventies funk-influenced groove Disco Touch and the laid back psychedelic breaks of the title track. This one’s all about the uptempo bounce of soul-sampling opener Mo Style though – what you might call an exercise in dancefloor temptation.
(Out 1 July on Cold Busted)