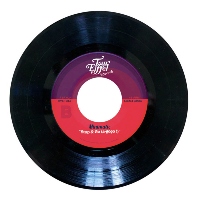 Minimatic – now there’s a name you might not have heard in a long time. Not that he’s phased, popping back into public consciousness as he just has with his Soul & Go 45 like all he did was nip off to the bar for a drink instead of straight vanishing for seven years. The release consists of double-booty action and the first of these is Are You Gonna Be My Soul Girl which pairs a certain Jet ‘pella with a D&B-speed stomping neo-northern soul drums and some jazzy piano tinkling. Shouldn’t work but it does! Also aimed at the dancefloor is the sweet funkiness of Soul & Go (A Go-Go)‘s pairing of a midtempo funky groove with a classic bit of Afrika Bambataa which is actually the monkey’s preferred cut of the two. Still, hear either and the discerning party breaks DJ will think, ‘Sounds so fine, I really wanna make you mine!’
(Out now HERE)