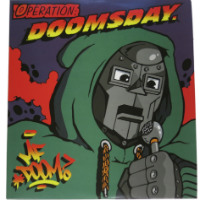 It’s fair to say that he-of-a-million-names, i.e. the man currently known as DOOM and variously known as Zev Love X of KMD, Viktor Vaughn, Metal Face Doom and King Geedorah (among others) is rather influential in hip-hop – a mythic figure even. It’s also fair to say that Operation Doomsday (i.e. the first album the man dropped following the sad end of KMD, the mid-nineties wilderness years and his subsequent resurrection as masked figure MF Doom) is rather influential too.

But what is it about DOOM? The intricate wordplay? The dusty sample-laden beats? The cartoon and comic book skits? The guest hook-ups from Madlib to Dangermouse: from Jneiro Jahzel to Bishop Nehru? The multiple DOOM impostors allegdly sent by DOOM to perform when he was…well – busy doing something else? Or just all of the above? The answer will be all of the above then, though without the first three of course, there would be none of the rest.

Whether you’re a DOOM virgin or a DOOM veteran however, now’s your chance to get your hands on the first album again as an official release (not a dodgy bootleg) of the version first released on the man’s Metal Face label in 2011 with double black and red vinyl, and 18 X 24″ poster and new cover art.
(Out now on Metal Face US)