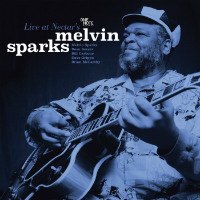 “My name is Melvin Sparks on the gui-tar!” Thus opens the first track, Miss Riverside, on Melvin Sparks: Live At Nectar’s to whoops and applause from the crowd. Melvin Sparks? Not ‘the’ Melvin Sparks? Melvin Sparks the rnb and soul jazz guitarist who used to back the likes of Dr Lonnie Smith, Jack McDuff and Charles Earland? Melvin Sparks whose soul-boogie cut If You Want My Love was recently re-released on 45 by Rocafort Records with the blaxploitation funk of Get Down With The Get Down on the flip? Yes, that Melvin Sparks – and this release presents the legend’s final recorded session which just happened to be a live gig at Nectar’s in Burlington, Vermont on a night when unusually, but fortuitously, the the club allowed multi-track recording. Not that you’d think it was live session of course, so consummate is the man’s skill (and that of the rest of his trio) until (as noted above) you’re surprised to be reminded of the fact by either the crowd or a few words from the man himself as tracks begin and end.

Listening to the LP, it’s not hard to see Sparks as an influence on its producer – Eddie Roberts of the New Mastersounds – as the nine-tracker showcases effortlessly funky soul jazz grooves which are guitar-led and organ and horns-backed. This last detail is a second unusual aspect of the night of the recording because it was the only time Sparks played with a horn section in the last few years of his life. Fittingly, the album closes with the voice of Sparks himself introducing the band in time-honoured fashion, revealing warmth and humour, (“Give the drummer some – but don’t give him too much – you gotta watch him”) and poignantly fades with our man’s deep throaty chuckle in a way he’d surely appreciate as an epitaph.
(Out now on One Note)