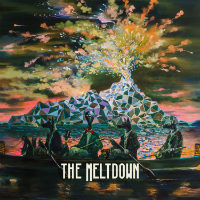 Looks like Melbourne outfit The Meltdown are all set to do for country soul what Smoove & Turrell are doing for disco and northern soul and Ephemerals are doing for soul, which is to say side-stepping the temptations of the retro-authentic route and putting a twenty-first spin on their chosen genre without losing a sense of the sixties and seventies roots of the music. Also, as in Ephemerals case, they achieve a sound and look that seems guaranteed to appeal to the indie crossover market. Not only that, but as with both other bands, The Meltdown quite obviously possess the musicianship, the songwriting ability and, in Simon Burke, a singer with which to go nuclear.

Their self-titled debut has the sophisticated production of a band several albums down their career pathway and is a ten-track set of cuts that veer between smouldering torch songs, moody groovers that evoke late-night driving down deserted Mid-Western blacktop and chugging bluesy movers. Emotive opener Darkness Into Light is a Jeff Buckley-esque affair featuring tremolo guitar and mellotron and speaks of staring out into wide open spaces wondering where life all went wrong. Don’t Hesitate opens with a funky fill which gives way to moody horns and keys and a subdued bounce while How Funny Is Another Man’s Pain is a chugs along like a Louisiana swamp-rock groover complete with Dr John-ish sax, and female backing vox. Well, at least we know who’s been listening to all those Soul Jazz Delta Swamp Rock comps. Slow Fever is the obvious single and the most obviously soulful of the cuts turning as it does on a funky drum break and horns combo while arguably the most powerful track of all is the dirty lurching blues of The Other Side. Not an band destined to stay underground or unknown for long, one feels.
(Out 7 April on HopeStreet Recordings)