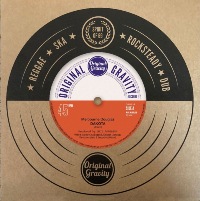 The second of two new 45s announced by the Original Gravity label recently (the previous one being Jodie’s soul cut Pushover) comes from Melbourne Douglas and The Regulators picking up where the previous Regulators 45 left off with an early reggae style Britpop cover. And since early reggae material is rife with covers, this merely continues the tradition. In picking Stereophonics’ Dakota those concerned find something which, while referencing early summer in the lyrics, has a wistful air to it and magnify this in the cover giving it a more wistful late summer feel. I say ‘those concerned’ since all Original Gravity releases to date have been masterminded by label owner and multi-instrumentalist Neil Anderson who usually plays most of the instruments to boot. Also, a sense of wistfulness is entirely appropriate in another way since the 45 won’t be shipping until the autumn. Which gives you plenty of time to appreciate the irie choir-backed glory of the A-side from Melbourne Douglas while for those who prefer a more skinhead ‘boss’ style approach, there’s the choir-less B-side from The Regulators again with Melbourne Douglas on vocals. It shouldn’t work but it does. Twice!
(Pre-order now/ Shipping October on Original Gravity)
TEXT COPYRIGHT: Stone Monkey/ monkeyboxing.com (2021)