MEGA RAN & AMERIGO GAZAWAY: STRANGERS: Back To The Lab 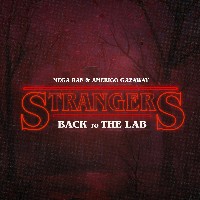 With the whole world gone Stranger Things-crazy, it would be rude not to take musical inspiration from the 80s-inspired show – especially if your field is hip-hop. After all, it’s not like the series’ themselves don’t heavily ‘sample’ the 80s cinematic output of Messrs Spielberg and Carpenter. So it’s hardly surprising that rapper Mega Ran and producer Amerigo Gazaway have used the Netflix mega-hit for source material on STRANGERS: Back To The Lab, the sequel to Mega Ran’s 2017 Strangers EP. This nine-tracker is particularly inspired by ST Season 4, as a quick glance at the tracklist will reveal with titles like The Hellfire Club, Vecna’s Curse and The Dive taken straight from that season’s episodes. It also features special guest appearances from Stranger Things cast member Glennellen Anderson along with Dillon and Ray Wimley.

Obviously, what everyone really wants to know is ‘Do Metallica’s Master Of Puppets and Kate Bush’s Running Up That Hill get sampled?’ and the answer is, ‘Hell yes!’ on The Hellfire Club and Superheroes & Monsters respectively. The 80s pop-sampling frenzy doesn’t stop there though and continues with the use of Journey’s Separate Ways on The Massacre. All three of the aforementioned cuts are produced by Gazaway who makes the single largest contribution to production on the LP being responsible for four cuts (the fourth being the remix of Superheroes & Monsters) with the five remaining cuts credited to K-Murdock (opener 2 Strangers), DJ DN3 (The Nina Project and The Dive), and Lost Perception for Vecna’s Curse and The Upside Down. Dialogue samples float around throughout the LP like spores in the Upside Down while Mega Ran weaves ST references throughout autobiographical lyrics. Because everybody’s got a Vecna, right? Available now in digital format, the LP isn’t something you’ll have to sign your soul away to the federal government for either, (or indeed become a slave to the Mind Flayer) since it’s available on a name your price deal – even for free if that’s all you can spring for. And if that’s not better than a slap in the face with a wet tentacle, I don’t know what is.
(Out now HERE)