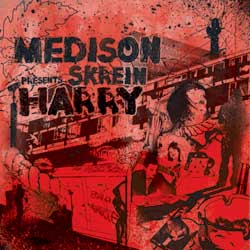 Up-and-coming producer Medison delivers a respectably well-produced slice of downtempo hip-hop melancholia here that turns on an attractive acoustic guitar riff/ helium vocal hook and features a slightly ridiculous tale of love courtesy of emcee Skrein. It would seem that poor miserable skater boy Harry never really gets it on with the ladies but finally falls head over heels with the gorgeous Misha. Who he then finds out (would you Adam and Eve it?) is an ‘erotic dancer’. Does Harry a) promptly shout, “Waheyyy! Guess what boys?” b) dump the bitch ‘cuz he ain’t gettin’ wit no slag’ or c) acknowledge that his missus might be doing this as a consequence of an abusive upbringing/ low self-esteem and respond sensitively? Does he fuck. The correct answer is d) he dumps her and then hangs himself in a ridiculous slough of unjustified self-pity. Tosser. The original rocks as does the acoustic remix by none other than Plan B and there’s also one of them noisy dubstep rerubs from Bare Noize and a dnb rerub from Ruckspin. Oh and a special bonus track in a similar vein only this one seems to be about two losers rather than one. Vid. of the Plan B mix below links, press guff below that…
Medison – Myspace
Skrein – Myspace
Dented Records – Myspace

(PRESS RELEASE) One of the hottest artists on the underground circuit, Medison has been turning heads left, right and centre recently with his incredible production.
Medison has been racking up collaboration after collaboration working with some of UK’s finest MCs, singers, songwriters and musicians, continually crossing boundaries between different backgrounds of music with his own unique style. This fresh talent has featured productions on albums alongside the likes of Jehst, Chemo, Fliptrix, Kashmere and more and that experience shines through on ‘Harry’, a warm and bouncy track that won’t fail to move some feet.

Bare Noize turn in a disgusting dubstep rework that’s as filthy as a mud pie with ebola ice cream on the side. Ruckspin throws the tempo to 174bpm and offers some D&B stylings. And finally, rounding off the package, is Plan B who turns ‘Harry’ on his head with an acoustic rework that’d be just as happy on the radio as it would on your iPod.