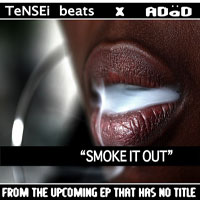 You know when your day job gets in the way of real stuff? Yeah? This has been languishing in my mailbox for days now while deadlines stalk me. Funnily enough All Natural-affiliate ADaD’s mood chimes with mine here exploring how miserable he feels and concluding that the answer is to ‘smoke it out.’ Could he be on about having a bifter? Additional lyrics including the words ‘inhale’ and ‘get high y’all’ would none-too-subtly indicate such was the case had the cover image of clouds curling from his mouth not already announced what a massive marijuana piranha he so obviously is. Delivering his flows via a world-weary smoke-throat voice to rival the RZA he’s accompanied in his musings by a rolling, red-eyed beat courtesy of those bad boy Chicago headz Simple X and Midas Wells – a.k.a Tensei. A dope track in more ways than one then…

MC ADaD x Tensei – Smoke It Out by Tensei

(PRESS RELEASE) ADaD x Tensei – Smoke it out
MC ADaD and Tensei recently decided to come together for an (untitled) EP as
well as an (untitled) short film project, to showcase they’re combined talents.
The first track from this newly formed collaboration “Smoke It Out”, is a teaser
from the upcoming EP due out in the not to distant future.
About ADaD:
ADaD is a Chicago based MC, a member of the Dirty Science Crew (Exile, Blu,
Aloe Blacc) and an artist on All Natural, Inc. He has worked with producers
including Exile, Wajeed, and Dibia$e, among others. Etching out the blueprint for
the future of emceeing, ADaD is the next breakout artist to enter into the rap
game. Championed by the likes of Exile and Q-Tip, he is the nexus between hip-
hop’s Golden Era and the new movements derived from today’s hip-hop.
Dubbed the next hip-hop hopeful, he thematically brings fans back to self by
preaching an acceptance of who you are. Executing wordplay that mainstream
hip-hop compensates for overproduction and posturing, ADaD shares stages
with some of the largest names in hip-hop with party-style performances never
having to compromise his art or message.
About Tensei:
“TENSEI” (??) , (“Heaven-Star”). The core members, Midas Wells (Serengeti,
Haiku), and Simple X (Herma Puma) is a Chicago based production group.
Tensei’s music is influenced by the multiple genres of music they collectively
sampled for over the years. Tensei brings a breath of fresh air to the game with
sample free production that goes way beyond the typical industry “keyboard
beats”, by incorporating many live musical elements amongst other things in the
fold.