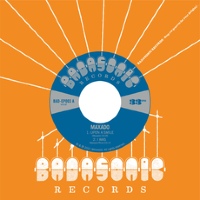 Brazilian early reggae outfit Firebug might have disbanded (no pun intended) but singer Maxado is still flying the boss flag with new 45 single Upon A Smile once again produced by former Firebug bassist and Latin Grammy award-winning producer Victor Rice. The PR says our man is ‘equally at home in all three early Jamaican styles’ – i.e. ska, rocksteady and reggae and the proof is right here on this single. Upon A Smile finds Maxado emoting about lost love over an early reggae riddim rich in horns and organ and also comes accompanied by rocksteady number I Was (in original and dub versions) and Portuguese-vocal ska cut Blusa. Another winner from Badasonic Records, this should definitely be on your list if you’re feeling The Aggrolites, Mango Wood or any of those ‘Sound of ’69-type drops from Original Gravity in the last two years.
(Out now on Badasonic Records)

Posted on 7th November 2021 no comments