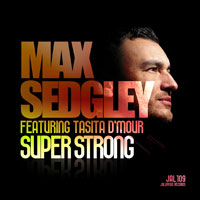 Mr Sedgely comes through with a big tune here, rich in nu-disco stylings, a fat synth bassline and diva vocals courtesy of Tasita D’Amour. Not really the monkey’s kind of thing, admittedly, but you’d have to be deaf not to recognise it as dancefloor catnip and the ladies’ choice. Remix duties come courtesy of Ghettofunk don Basement Freaks who emphasises the break and electronic disco heads Faze Action who do something nasty and house-y – the original cut is still the best though. One to pull out of your bag (or, increasingly, your laptop) if your funk/ hip-hop night inexplicably pulls in a couple of hen parties and a crowd who wanted something ‘a bit more Ibiza mate.’ We’ve all been there…
(Out 28 February on Jalapeno Records)
Listen to – Max Sedgely – Superstrong
Max Sedgley – Facebook
(PRESS RELEASE) Superstrong is the third single to be taken from Max Sedgley’s supremely funky album Suddenly Everything. Having won the accolade of having one of the remixes of 2010 on iTunes – Max steps up his game with the release of Superstrong. Fusing funk, disco and house on the original version – Max shows why he remains at the top of his game as an in demand producer and remixer.