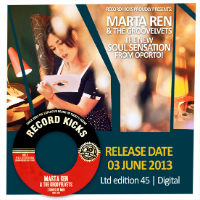 “So Marta – what type of music do you and the band play?” “Oh both kinds – funk and soul.” ‘Nuff said as Record Kicks‘ latest find is Portuguese crew Marta Ren & The Groovelvets – an outfit who supplement super-tight arrangements with powerful soul vocals from Ren of whom it must be said: ‘girl got a voice!’ I hadn’t heard anything on the contemporary soul scene to approach The Excitements’ Koko-Jean Davis or Sharon Jones in terms of both power and sixties-sounding authenticity until now but, damn, Marta runs them pretty close. As she demonstrates very amply on both the pre-funk Motown sound of Summer’s Gone (not yet it hasn’t) and superb sister funk burner 2 Kinds Of Man. The album’s due before the end of the year – you can lay money on it that the monkey will cover that one. Trust. Summer’s Gone vid below players.
(Out 3 June on Record Kicks)