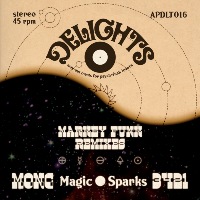 Certainly no stranger to psychedelic sounds, Markey Funk now embarks on a timeslip trip that takes him all the way back to 2013 and 2014 to grab a couple of old remixes for vinyl 7″ release in 2020. One of these is his (appropriately-named) Timewarp remix of Men Of North Country’s mod-soul heater Magic while t’other is his spacey (and equally appropriately-named) Spatioport remix of 3421’s Sparks. Swapping horns for a windmilling drum break, the Magic remix transports the listener to a retro fifth dimension that rather resembles being inside a giant lava lamp, while the 3421 remix adds a host of retro synth effects and ditches the old hoover bassline for a less jarring one to end up at broadly the same point in the space-time continuum. Give or take a few parsecs.
(Out 6 November on Delights Records)