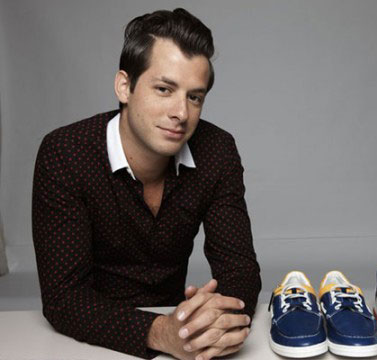 The forthcoming, Q-Tip and MNDR-featuring single from Mark Ronson is apparently “Like Van Halen and The Meters had a baby” according to Ronseal himself.
LISTEN to Bang, Bang, Bang feat. Q-Tip here

(PRESS RELEASE) From the forthcoming album Record Collection, ‘Bang Bang Bang’ sees Mark Ronson doing what he does best – smashing disparate genres and artists into each other headfirst, before standing back and admiring the controlled, party-starting chaos left behind. Featuring the talents of Ronson’s old mucker, rapper Q-Tip, as well as vocals from MNDR, who moonlights as the Yeah Yeah Yeahs’ live keyboard player, the first single from the Mid-Atlantic mastermind’s new album ‘Record Collection’ – the follow up to ‘Version’, which went triple platinum in the UK – is a playground funk triumph.
Released through Columbia, it’s a collaborative effort, with Ronson at the production helm. The song was built using a classic Eighties Duran Duran keyboard idea (‘Setting 32 on the Prophet V,’ says this self-confessed trainspotter and crate-digger) and a version of French nursery rhyme Alouette (MNDR’s idea). Add to this a writing contribution from Nick Hodgson of Kaiser Chiefs and ideas culled from Ronson’s experiences touring the festival circuit and the result hangs – bangs – together brilliantly.
‘When we played all those festivals in 2007, we’d end up in the dance tent. And I got so jealous when Justice or Soulwax or Pendulum would go into their double-time breaks, and all the kids would start jumping up and down. And we never had that tempo in our set. So I just wanted that in one of our songs’ – Mark Ronson.
Zane Lowe will be giving ‘Bang Bang Bang’ an exclusive first play on his Radio 1 show on Monday 24th May, while Ronson’s 16-bit styled instrumental ‘Circuit Breaker’ has already gone viral, getting the blogs burning like an aural Bunsen burner. ‘Bang Bang Bang’ – it’s the kind of explosion you’ll be more than happy to stand next to when it goes off.