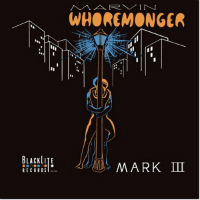 Something else that slipped under the radar back in November was Mark III’s Marvin Whoremonger LP. God knows why – how could you not immediately pounce on an LP named Marvin Whoremonger? Actually though, it’s not the first time in the record’s history that it’s received such shabby treatment. This every-bit-as-filthy-as-you’d-expect funk album was recorded in 1976 by Stateside quartet Mark III consisting of vocalist and Vegas hustler Marvin Neros along with three teenage brothers – respectively a guitarist, drummer and bassist along with a variety of Hollywood session musicians – presumably among them a mass of horn players and somebody with the boogie-est of sensibilities on keys. And the rest – er – wasn’t history.

Perhaps it was the juxtaposition of the rough-around-the-edges psychedelic funk with a polished horn section and disco boogie synth sound? Perhaps it was the minimalist artwork depicting a couple shagging against a lamppost (from both front and behind on the back and front of the LP) in a decade where you’d have been more likely to see real nudity on cover art. Either way – it promptly fell off and was consigned – ironically enough to collectors’ ‘holy grail’ status.

Not to worry though – the diggers extraordinaire at the Now Again label have re-mastered and re-packaged this gloriously indulgent six track gem (eight including two instrumental versions of vocal cuts) so that you can now join Marvin and crew on their late-era funk-a-delic wigout. And in fact, as sonic reference points go, the rawness of early Funkadelic (think their debut LP and Free Your Mind…) is a good reference point here (even though Clinton’s outfit by ’76 had a much more high end production sound) as is later period Sly & The Family Stone – since this never really crosses over into heavy rock territory. All the more reason to take the trip perhaps…
(Out now on Now Again)

Posted on 20th December 2016 no comments