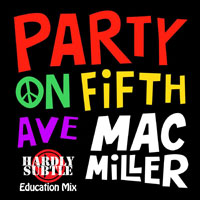 In a bizarre twist Plymouthian/ Bristolian production duo Hardly Subtle (Aldo Vanucci and Dave Remix) take on the role of the nation’s musical educators as they deliver a ‘lesson’ based on one of the most famous samples ever with their Mac Miller Party On 5th Avenue (Hardly Subtle ‘Education Mix’). In an even more bizarre twist this means that I find myself in the role of Ofsted – which is not one I savour since Ofsted are a bunch of goalpost-moving cunts, led by a hypocritical borderline psychopath and answerable to neo-Victorian moron who looks like Pob. Nevertheless, I am happy to award this bootleg a rating of ‘outstanding’. How you describe said sample partly depends on your age or your knowledge – it is referred to variously as ‘that one in the 45 King’s 900 number/ Chad Jackson’s Hear The Drummer Get Wicked/ DJ Kool’s Let Me Clear my Throat or (for the yout’) ‘that one Sway used on Mercedes Benz/ Mac Miller used on Party On Fifth Ave. However, as anyone with a rudimentary knowledge of funky soul is aware – the sample is actually from the intro to soul queen Marva Whitney’s Unwind Yourself. They’re all on here (except for Sway) along with a ‘who’s who’ of old school microphone fiends and beats. It’s not the kind of thing they teach you in school. Know the ledge below and feel free to cop both the ‘dirty’ and ‘clean’ downloads – and as a Brucie bonus as of 11 July 2012 – the ‘Classic Mix’: