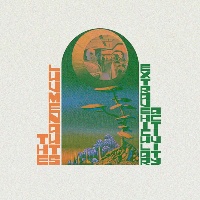 Toronto-based Luvmenauts engage in some Extravehicular Activity for their latest EP and you’ll be glad they did since this involves a six-track instrumental journey through all their favourite retro influences. The four-piece outfit venture down the seemingly never more popular ‘create a soundtrack for films that never existed,’ rabbit-hole having been inspired by library music dons Alan Hawkshaw, Janko Nilovic and Piero Umiliani along with the artistic visions of Moëbius, Jodorowsky and golden era pulp. And if by now you’re imagining the scores to sixties film versions of Edgar Rice Burroughs’ Martian novels from an alternative universe, you’d be about ball park. The sounds on offer are positively kaleidoscopic, linked together by the images they evoke from a span of movie-making that started in the late sixties and ended in the early eighties. The beat on the opener and title track for example gradually emerges from unfolding layers of vintage-style synth FX with the track ultimately sounding like the lovechild of the Barbarella and Koyaanisqatsi OSTs. Solstice & Equinox on the other hand, features Grammy award-winning saxophonist and borders on Astatke-like Ethio jazz, while Asteroid Mines Of The Kuiper Belt is top-notch dancefloor eastern-tinged psych-funk exotica. In short – Extravehicular Activity is a trip and one that you’ll wish was longer.
(Out 26 March on Do Right! Music)