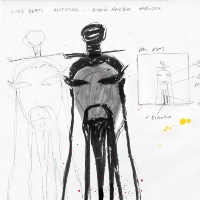 Say hello to the latest drop from the Little Beat More label – Luke Beats’ Black Mamba, complete with video. The Italian bass player and producer likes to chop out a decent sample using his MPC and SP404 and since his tastes include Shaw Brothers kung-fu flicks and the musical work of Dilla, Madlib and Pete Rock, it’s probably little surprise he’s ended up with the track and video that he has for Black Mamba. And what that’ll be is an off-kilter, synth-laden boom-bap instrumental named after a Kill Bill character that kicks off with a kung-fu movie audio sample and a video of said track concocted of footage mainly from what looks like Executioners Of Shaolin with bits of Kill Bill Vol. 2. You know it makes sense.
(Out now on Little Beat More)

Posted on 17th November 2021 no comments