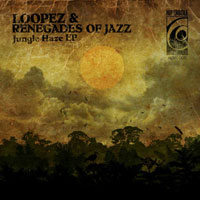 Jungle Haze? Yeah, I know all about that. I was in Sri Lanka once living on the beach by the jungle and the only haze there was the permanent cloud of pungent smoke outside the rooms of a group of Israeli surfers. And not even a strong onshore wind could shift that. Also permanent was the music that accompanied their smoking. It was mostly Bob Marley or Slightly Stoopid admittedly but if they’d heard this – they’d have been on it. Why? Because this EP offers up chilled instrumental grooves with Latin flavour from Renegades Of Jazz (who’s become a byword for classy sophistication round these parts) and his mate – new Hiperbole signing Loopez. Remixes come from Lady Daisey’s producer Batsauce and Bastard Jazz boy Jugoe. It’s practically a four strong invitation to light it up. I suppose you might call it a ‘joint’ effort. Lay off the skunk though – you may wish to have a gentle shimmy.
(Out 14 October on Hiberbole)

(PRESS RELEASE)
Hiperbole’s latest signing Loopez teams up with Renegades Of Jazz for the Jungle Haze EP. Their idea of producing some tunes together turned quickly into some very productive sessions and after sending their work back and forth through the wires of the Atlantic ocean they produced two Latin tunes of joy. Jungle Haze comes with flawless trombone arrangements and a catchy hook and the latin-styled organ, played by Loopez and some moody vibes from the jungle. Remixed by Berlin based superproducer Batsauce (Producer of Lady Daisey) the track gets more haze and dusty deepness through his amazing rework. The Lapwing Strut is a more downtempo, but no less wonderful, track and again shows how good they feel working together. This tune is a hymn for the head-nodder and toe-tipper on the promenade watching Lapwings struttin’ for the other gender. Remixed by Bastard Jazz artist, Jugoe from Chicago, who gives the original a banging bassline a and some great Ironside sweeps, the Lapwing turned into a modern club manifest.

Posted on 4th October 2011 no comments