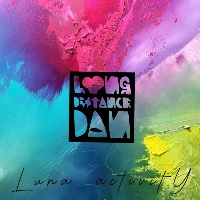 Say ‘hello stranger’ to Long Distance Dan (or should that be LongDistanceDan?) who returns to Earth with more of his customary way out sound from way out on latest drop the Lunar Activity EP.  Boasting six tracks a logo from Kid Acne and cover art by Sun Moth, the EP was both written and produced by Dan and kicks off with Riding Lightning featuring an appropriately crunchy drum break and lashings of
synth melody and bass.  In contrast, Rise sinks the drums to hip-hop speed and floats Vangelis-like noises over the top to the extent that you keep half-expecting Cannibal Ox to drop in on the mic.  It’s a trick he does so well he repeats it on the lurching beats of even slower Dead Flower and the more rolling title track which is no bad thing.  The sound on Mirrors has twin influences of Delia Derbyshire (as we’ve heard before from Dan, The Grits and the Delights Records crew, among others) and something a little more Far Eastern at times.  The whole thing closes by picking up the tempo again on From The Ground Up.  Here a rumbling bass intro is eventually juxtaposed with a flute lead and rolling drums again as we head to psych-funk territory which is arguably more conventional but still pleasingly far-out. Oh yes, and the whole release is available as a ‘name your price’ download – because Dan doesn’t just promise you the moon.
(Out now on Dusted Industries)

Posted on 14th November 2021 no comments