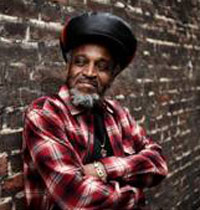 Studio One legend Little Roy releases his sixties ska version of Nirvana’s Lithium next week. It’s the best track off his Battle For Seattle album (produced by Prince Fatty and Mutant Hi-Fi) and the relentlessly upbeat backing manages to reduce Cobain’s grungey miserablism to a faint undertone of melancholia on an otherwise jaunty number. It’s prompted such descriptions as ‘daring and brilliant’ (bbc.co.uk), ‘Glorious’ (Daily Torygraph), ‘Stunning’ (Mojo) and ‘Works brilliantly’ (The Times) who’ve all still only given it 4/5. Which makes you wonder what you’d have to do for 5/5 and how much more hyperbolic said reviewers could have been without rupturing the very fabric of meaning. In the interests of journalistic integrity therefore, I’d like to dub it (no pun intended)…pretty good.

(PRESS RELEASE)
Little Roy has announced details of the release of a new single. Lithium will be released through Ark Recordings on Monday December 5th 2011. The single is lifted from his recent album with Prince Fatty and Mutant Hi-Fi, Battle For Seattle, a collection of 10 songs recorded by Nirvana covered by the legendary Little Roy in a reggae style.
A man with the ‘right credentials’ Little Roy cut his first single at the legendary Studio One in 1965 and grew up in Kingston surrounded by many of Jamaican music’s biggest hitters – Prince Buster, Lee Perry, Bunny Wailer & Peter Tosh. Later a growing interest in the emerging rasta religion saw him release some early roots classics such as ‘Prophesy’, ‘Christopher Columbus’, and ‘Tribal War’ and most recently he has worked with Adrian Sherwood releasing an album on On-U Sound Records.
Following an acclaimed session on Jools Holland’s Later show in October where he played ‘Lithium’ and ‘Heart-Shaped Box’, Little Roy was recently praised by Noel Gallagher on Jo Whiley’s Music show who stated that Little Roy’s album was “probably the greatest thing I have ever heard”.

Posted on 28th November 2011 no comments