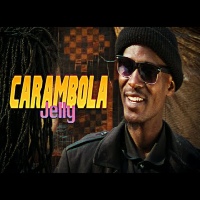 Stand by for the Ugandan-Estonian funky disco-cinematic team-up that is ‘Ugandan Tarantino’ Nabwana I.G.G.’s new video for Lexsoul Dancemachine’s Lexplosion II LP track, Carambola Jelly. Carambola, is of course also known as ‘the star fruit’ and makes an early appearance in the video’s short tale of urban gangsterism with a ‘wife’ beginning to prepare what must surely be – well – carambola jelly. It’s not long before wifey’s legs turn to jelly however as the local mafia boss stages a house invasion whilst toting a jazz cigarette the size of a baseball bat. Hubby’s not so keen on the missus being jacked (surprisingly), and a rescue mission featuring assorted hand-held weapons, a computer-graphic helicopter gunship and much wobbly-legged martial arts-cum-street dancing, ensues. Well, it’s hardly surprising given the prodigiously rubbery groove supplied by the Lexsoul crew.

Posted on 8th October 2020 no comments