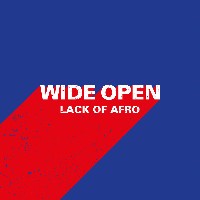 Turns out it’s been more than two years since the last Lack Of Afro release if you don’t count Adam Gibbons’ side hustle last year putting out cinematic soundtrack breaks stuff as – er – himself. So as he points out in the PR blah for new single Wide Open, “I knew that the first track back had to hit and to hit hard.” And hit hard it does. Nodding to classier late 90s big beat along with early RJD2 material it kicks off with portentous voiceover from an up-against-it artist reflecting on emerging from hard times who concludes, “All that shit aside, everything was wide open.” Cue the widest possible opening of the musical floodgates as the track launches into full-on epic funky breakbeat mode laced with squalling rock guitar, piano and horns and densely layered percussion. That’s one way to exorcise your demons.
(Out now on Bastion Music Group)

Posted on 17th November 2022 no comments