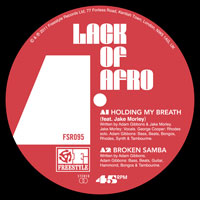 Holding my Breath is the second single from Lack Of Afro’s latest LP This Time. Like its predecessor, it rocks the kind of smooth soul vibe to be found all over Smoove & Turrell’s second LP so if you’re down with that, you’ll be down with this as singer Jake Morley gets his mood on over clattery floor friendly percussion. LOA homies Unity Sextet rework this on the flip, uncomplicating the break and have fun with various bits and bobs out of their little bag of jazz. The release also features two instrumental tracks which I – er – kind of prefer. The first of these is the big Rio carnival vibe of Broken Samba which has a really sweet guitar melody and the second is an instro of the track that (in its vocal form) I personally would make a single – the Wayne Gidden featuring northern soul burner What The Hell. Hint. Ahhh – they know they want to really…
(Out 28 November on Freestyle)

(PRESS RELEASE)
2011 has been a critical and creative high point in the career of Lack Of Afro (Adam Gibbons) seeing the release of without doubt the strongest LOA album to date This Time, the incredible summer ballad ‘A Time For’ being many people’s single of the year, not forgetting of course that accompanying video! DJing, production and remix projects coming thick and fast including The Unity Sextet and now the release of the magnificent 12 inch single/download Holding My Breath.
The title track features rising vocalist Jake Morley on this hard grooving minor key, moody barnstorming dance floor filler. With biting lyrics riding over an equally tough & unrelenting rhythm, this track pulls no punches and takes no prisoners! In total contrast Broken Samba is a feel good, sunny, shimmy shaker that can’t help but cause hips to sway, toes to tap and make you want to jump on a plane and head south rapidly. The Unity Sextet are a new outfit that Adam Gibbons has been producing, and their remix of Holding My Breath moves the track into a more sparse, jazzier direction, just before the instrumental version of album track What The Hell jumps into your ears and drags you back to the middle of the dance floor as The New Mastersounds guitarist Eddie Roberts mind altering wah wah guitar solo peels your ears back and messes with your head. With 100% exclusive tracks, brand new remixes and this bonus instrumental…this is a BIG record!
Tracklisting:
A1) Holding My Breath
A2) Broken Samba
B1) Holding My Breath – Unity Sextet Remix
B2) What The Hell – Instrumental version

Posted on 17th November 2011 no comments