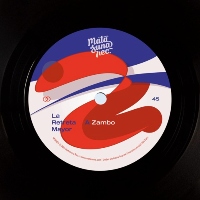 Next from the Matasuna Records label comes this vinyl 45, featuring a re-issue of 1976 cut Zambo by Venezuelan outfit La Retreta Mayor.  It is lifted from the band’s eponymous debut LP and comes with a remix of said track to boot. The A-side features the original – a potent melange of Latin-influenced dancefloor jazz and funk – while the B-side consists of the remix by San Francisco producer King Most. This latter effort adds a new intro, outro and bridge, as well as extra drums and a bit of a bottom end boost whilst maintaining the organic feel of the original. All of that means this is a wax package that any DJ who plays lots of Latin stuff (and many more besides) will be happy to have in the crates.
(Out 28 January on Matasuna Records)