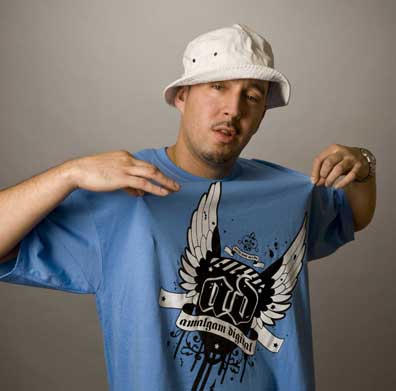 FEATURES GUEST APPEARANCES FROM MAX B, MF DOOM, MC SERCH AND PRODUCTION FROM HI-TEK, 88-KEYS, THE BEATNUTS, DAME GREASE, DOMINGO, V.I.C. & YOGI…
Golden age fans of Hip Hop will remember full page split advertisements in ‘The Source Magazine’ for what was at the time two of Columbia’s most promising Hip Hop artists Debut albums. One half of the advertisement was Nas “Illmatic” and the other was for Kurious Jorge “A Constipated Monkey”. Well now, everyone’s favorite “Constipated Monkey” is back with a brand new album for 2009! Kurious Jorge and Amalgam Digital are proud to present “II”, Kurious’ first studio album in over 14 years, which will be released on March 24th, 2009.

Hailing from Harlem , Kurious is best known for his early-to-mid 1990’s hits such as “Walk Like A Duck”, “Uptown Sh*t”, “I’m Kurious” and “A Mansion & A Yacht”. His debut album, “A Constipated Monkey”, was released in 1994 to critical acclaim. His association with Bobbito, Pete Nice (3rd Bass) and MF Doom (KMD) further cemented his folklore in underground circles worldwide

After a lengthy hiatus, Kurious signed to the Amalgam Digital label in 2007. Amalgam re-released the classic “A Constipated Monkey” album later that year which included never-heard-before bonus demo tracks from the early 90s. Kurious’ new offering “II” features guest appearances from the likes of another Amalgam Digital signed artist, Max B, and reunites both MC Serch with Mf Doom for “Benneton” as well as regrouping with original posse members The Beatnuts who return a favor to the man who laced their chorus with the vocals “When I pop the trunk…hit the deck”.

Stellar production is handled by a “who’s who” in the beat game: Dame Grease, 88-Keys, Hi-Tek, The Beatnuts, V.I.C., Domingo and Yogi. Songs such as ‘Animals & Horses’, ‘Work It’, and ‘From Up Under’ prove that Kurious’ lyrical skills and wit are still sharp as ever while the classic “Sittin’ In My Car” pays homage to the original version by Slick Rick and Doug E. Fresh.

The album “II” will be available on CD and Digital format on March 24th 2009. When fans purchase the digital version of the album from the www.AmalgamDigital.com online store they will receive additional bonus songs including a new track featuring Del The Funky Homosapien.

Check out the lead single video “Back From Up Under” ft. Max B HERE.

Also check out the promo video of Kurious & The Beatnuts HERE.