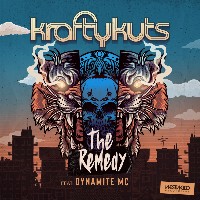 Have you got the poison? Don’t worry, Krafty Kuts and Dynamite MC have got the remedy in the form of new single collab. entitled – er – The Remedy. It’s not the first time the pair have worked together nor even the second or third (though possibly the fourth) and finds Krafty supply a noughties boom-clap-style, bass heavy hip-hop beat over which Dyna rocks the mic.  But what malaise could our intrepid pair be addressing and what ‘remedy’ could they be offering?  The latter part is easy, since they ‘get the people moving round and round’.  Dyna finds this straightforward, it seems, because they’re ‘all up on his sound,’ and additionally notes that, if you’re fed up, then get up ’cause they’ve got the permanent heat that won’t let up’.  While that sounds perfect for a back injury, reading between the lines, it’s not too hard to infer that the malaise in question is not having anyone with the requisite skills to start a party.  It’ll be a common issue right now, one suspects, what with the Omicron variant enjoying a stratospheric rise in transmissions and it seems like parties will be on the decrease once again – unless you work in the moral black hole of Downing Street, of course.  Nevertheless, in any notional future when normal people can party hard once more, Krafty n Dyna should sort you right out with this.
(Out now on Westwood Recordings)

Posted on 14th December 2021 no comments